Book One in the Fahr Trilogy

The Fahr are alien song addicts,

the humpback whale is the ultimate singer

and the Human Race is in the way.

Teracia is a member of the aquatic Fahr, the oldest and most powerful sapient species in the galaxy.    The Fahr are addicted to song, so much so that they create large corporate entities to travel the galaxy in search of pets that can sing.   It’s a lucrative business and one that often tramples on lessor sapients.   Teracia, who has a deep concern for the fate of such species, talks her way onboard one of the Fahr corporate ships.   She hopes to protect whatever sapient species they might encounter. 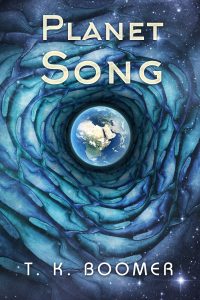 She’s on the Fahr ship when it arrives on the Earth in the middle of the 14th century.  There’s an immediate buzz on board with the realization that Earth’s oceans are teeming with aquatic singers.  But there is also a problem.  The planet has a sapient species, a stagnant and plague ravished Humanity.   By Fahr law, they must ensure that their pet collecting activities do not interfere with this species.   But the ship is many light-years away from meaningful enforcement of this law. Terecia lobbies for the human race, but to no avail.  Commander Prostallen decides to collect the pets, in defiance of the law, and worry about the consequences later.  They land in the Pacific Ocean where they discover the real prize, the humpback whale.  The song of this animal is so powerful that it kills the first thirty Fahr exposed to it.  But Prostallen soon realizes with certain dangerous frequencies filtered out, humpback whale song will become the ultimate sonic drug and a huge boost to the corporation’s profits. The ship they have arrived in, however, is too small to transport a breeding population of these animals.

Prostallen returns to the Fahr home planet to get a bigger ship, a round-trip journey that will take 650 years.  No one in the Fahr leadership believes that Humanity will present much of a challenge.  When the Fahr return to the Earth in the 21st century, the human race has evolved into a different beast.   This one is capable of much stiffer resistance to Fahr corporate plans, but the Fahr now have too much invested to turn back. Against all odds, Teracia must try to protect Humanity from a war they cannot win.

It has now been two years since I published Planet Song. I had misgivings about how the science-fiction reading public would react to it, but there are now 35+ reviews online and the average is four stars.   I’ve had several publisher, agent and editor types tell me the book’s languid beginning would be a barrier to many readers. The conventional wisdom for engaging book openings is that the writer must either thrust the reader into a traumatic opening scene or create a strong bond with the character, preferably both.  Agents and publishers often won’t read past the first few pages of a manuscript if this does not happen. The hook must be there, or they move onto the next manuscript in their slush pile.

The problem here is the definition of a hook is too narrow. Sometimes novelty is enough to keep the reader going. Planet Song opens with an alien job interview, a full immersion scene that introduces the reader first to the strangeness of Fahr society and then to the central conflict of the story: the individual versus the corporation. Of course, we’re talking about an alien individual, Teracia, and an alien corporation, Song Corp.

Much to my amusement, the most common criticism of Planet Song is my late introduction of the human point of view.  This is a first contact novel, but by the time ongoing human characters an appearance, many readers are so hooked on the alien Fahr culture that a regular ordinary human point of view is jarring.  It is also a literary necessity.

Those wishing to explore the genesis of The Fahr Trilogy and Planet Song should read my blog “Extreme World Building”.

The excerpt of Planet Song I’ve chosen to provide here may well be the creepiest scene in the entire book.   It’s also the first scene I wrote so I am loyal to it.  You can read it here.

Planet Song is available at a reduced price at any of the following vendors.