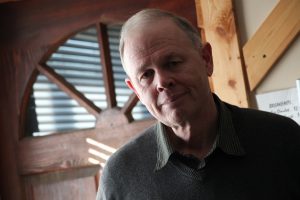 “Gone viral” is the term used these days to indicate something that has rapidly gaining attention on the Internet.    In most cases this is a sudden and intense interest and is usually fleeting, at best a month or two before it stops commanding public attention.  If we were to stretch the disease metaphor this is a 24-hour flu, an infection that hits hard but runs its course quickly.  If the creator is skilled, this flu can have a lasting effect, creating secondary outbreaks that sustain interest.  It’s rarely, however, associated with books.  For that you need an entirely different digital disease, a literary infection.

A few years ago I went to the Edmonton Folk Festival.  It was the first time I had been at an event like that in over thirty years, close to a hundred acts playing over four days.  Most of these acts I had never heard of but I was struck by the uniform excellence of the music.  Why had I been so unaware of them?  It’s true I don’t really move in folk music circles but still these were truly superb musicians, yet relatively unknown.

The following year I volunteered at the folk festival and wound up working on a stage crew.  This allowed me to meet and talk with quite a few of these musicians.  What I learned was that most of them were touring constantly, getting their music in front of audiences and then selling their cds after the show.  A lack of significant radio airplay had forced them into an artistic survival strategy where they built up small pockets of fans in isolated locations across the globe.  And keeping those fans required constant touring.  They lived their lives in RVs and hotel rooms.

This is not a strategy that most writers can meaningfully employ.   To begin with most of us are far more comfortable in front of a computer screen than we are performing.   In contrast to musicians and actors we do not generally rehearse our public appearances. This is because our art form involves engaging readers, not in performance spaces, but in the quiet parts of their lives.

One of the appeals of the writing life is that image is not a big part of what we do.  We don’t have to be overly concerned about how we look.  Margaret Atwood does not sell books because of her public’s obsession with those curly grey locks, and George R.R. Martin would look terrible in spandex.  Fans of authors may be curious about their favorite writers and want to meet them and get their books signed, but this has nothing to do with the raging fandom that more image-conscious art forms encourage.

The other truth about public readings is that these are generally sparsely attended events.  I went to a public reading by Nancy Kilpatrick, a well-known writer of vampire tales, where she attracted an audience of about fifteen, and half of these were fellow writers.   Even Robert J. Sawyer, Canada’s best-known science fiction writer, attracted an audience of only about fifty the last time I saw him, and again a high percentage of those attending were writers.

So how do writers promote their work?  It might surprise you to learn that they are even more dependent on their fans than pop stars are because they need more from them, especially at the beginning of their careers.  This is where I want to return to the disease metaphor.    The writer cannot expect his work to go viral, but a slowly creeping infection is certainly possible and even desirable.  What would this look like?

The Internet currently drives 85% of book sales in North America; so getting noticed on it is a prerequisite to having one’s books read.  It is also, unfortunately, one huge scary place and getting attention amongst all that digital white noise is a daunting task.  Designing a strategy that hopes for a viral outbreak is a best risky and likely to fail.

Most people read a book because somebody else has recommended that book.    If you recommend a book to others, you are doing the author a favour.  If they in turn recommend that same book, the favour is amplified.  This is slow book promotion that picks up speed over time.   Good books by unknown authors do not usually go viral, rather they slowly infect the web.    The trick is to get that infection started and that’s where online book reviews come in.

Sites like Amazon know this and that’s why they encourage reader reviews.   The problem is the percentage of people who actually review books online is quite small.  I suspect this is because many people either don’t feel qualified or have unpleasant memories of being forced to do this kind of thing back in school.   And there’s effort involved to be sure.   It takes 15 to 20 minutes to review a book and post it online.  This is what I meant when I said that writers require more of their fans.  Without those reviews a book is guaranteed to tank.   It will do nothing if the reviews are not there.   This is the current Internet-based reality for most writers.  We need you, the fan, to do the digital word of mouth.

What most authors are hoping for is not a formal review, it’s a recommendation; the same thing that you would tell a friend over coffee.  This isn’t about parsing out the book’s structure and character development and insightful comments about the writer’s overuse of the passive voice.   It’s about did you like the book or not and why.  This is about sharing your experience with that book in your own way.    And when you do that, you do the author a big favour.  I would rather have someone recommend my book than buy it.

I mentioned earlier that the Internet drives 85% of book sales and that it’s difficult for a new author to get noticed.  A single review/recommendation will not change that but the more of those that appear beside a book’s title in the Amazon listing the bigger the effect.   If someone clicks on that book and sees a couple of dozen reviews it means that the book is gaining momentum, that more people are reading and enjoying it.   If it has fifty reviews Amazon will add its own promotional might to the book.  Reviews are the best kind of promotion the author can get.  It’s a slow and steady way of getting noticed on the Internet.   It drives sales and recognition for the author.

I am now getting into the habit of leaving a three or four sentence review of every book that I read.   Especially if I know the book is by a relatively unknown author, because I know how important those reviews are.

Now you do too.

Technical stuff. The very best place to review a book on line is Amazon.com, not Amazon.ca (the Canadian Amazon site) or GoodReads or Kobo.   Amazon.com. It is by far the most important online book review site.  If you’re not already an Amazon customer you may have to sign up.  This will not cost you anything.   You will not have to buy a book, but unless you’re in the system, they won’t let you leave a review.  Sad but true.  They are the biggest online book resellers on the planet, hence the influence.