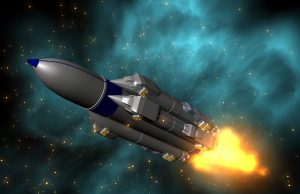 Every science fiction writer has something that drives him or her.   For many if not most writers this is the need to pen a story and have it read, usually by means of publication.   A quick visit to the websites of most literary agents or publishers yields one dominant insight into what one must do to achieve this.  Write an engaging story with believable characters and immerse the reader in the story within the first few pages. This is sage advice if you want these folks to notice your work.   Often they won’t read beyond the first few pages and what they’re looking for is engagement, a powerful plot and character-driven hook.

Notice what’s missing here.   Rarely are you asked what your book is about.  If you are, what they’re referring to is the storyline, the narrative structure of the piece.   What’s not being asked is what the book is about in a thematic sense.  What are you trying to say?  They may ask that question once you’ve passed the litmus test of having an engaging opening to the book, but it’s not what they’re looking for.  This has created an emphasis in the modern science fiction genre where what the book is about in a thematic sense is not nearly as important is this “engagement” aspect.   Many writers these days have little or nothing to say on the thematic front, but they get away with this because their book clips along at a good pace, has engaging characters and cool tropes.   I’ve had published writers tell me that they never think about theme, and others tell me they try to add the theme in after several drafts.  The resulting books, while they might engage and be fun, rarely leave a lasting impression on the discerning reader.

When discussing science fiction one often winds up referencing films rather than books.  The genre is far hotter in cinema than it is in literature.  A lot more people experience science fiction through films than by reading it and this creates an emphasis in the literature that is decidedly cinematic. (I will not discuss this here as this is a huge topic that needs to be addressed on its own.)  Two science fiction films of note were released in 2014.  The first of these, “Guardians of the Galaxy” was so popular it garnered the Hugo award for best science fiction movie that year.  I admit to enjoying this film.   It was clever, funny, contained great visuals, and engaging characters.  It also had nothing to say. It’s a greasy popcorn movie with no nutritional value and its popularity points to a problem in the modern science fiction genre.  The audience has learned to expect titillation without consequence, engagement without gravitas.

The second film that came out that year was “Ex Machina”, a much quieter and slower-paced film that stayed with me long after I left the theatre.   It is a meditation on the wisdom of creating artificial intelligence in our own image and hauntingly powerful.  I’m unlikely to ever revisit “Guardians of the Galaxy”, but I’ve already watched “Ex Machina” twice and will include it in my movie collection.

A more recent example is the film “Arrival”. “Arrival” addresses our response to fear of the unknown by suggesting that attempts to communicate are far preferable to blowing aliens out of the sky.   That has implications for our response to other things we fear and don’t understand.    There’s a lot more going on in this film, meditations on time and grief to name a few, but the point is it gets one thinking.  This is helped by the film’s enigmatic ending.   Yet for many people, this is an annoyance because what they’re looking for is the adrenaline-fueled escapism provided by something like “Star Wars:  The Force Awakens.”   I enjoyed the latter film but, again, it had nothing to say.

I  know that many of the movers and shakers in the science fiction establishment like the way things are.   How else do you explain the budgets given to films like “Independence Day: Resurgence” or “Chappie”, two films so vacuous that even the plot lines and characters don’t work.   Yet the money was made available for these films because the projected adrenalin-rush trope-heavy plot lines promised to deliver what movie sci-fi fans were looking for.  And big profits.

There’s an even more troubling problem here.  Science fiction, during its classic period, was often characterized by its thematic elements.  Books like Ursula K. LeGuin’s “The Left Hand of Darkness”, Arthur C. Clark’s “Childhoods End”, Walter M. Miller Jr’s “A Canticle for Leibowitz” or even a bit later Orson Scott Card’s “Ender’s Game” are known more for their thematic elements than they are for their tropes, plots and characters.  LeGuin, until her recent passing was regarded as the grand dame of science fiction writers, published “The Dispossessed” in 1974, a novel that won the Hugo, Nebula and Locus awards.  I’ve recently reread this and what’s curious about it is, despite its rich thematic content, this book has the pace of an arthritic tortoise.  It unfolds beautifully but a spaceship does not blow up on page three.   I suspect that were Ms LeGuin still with us and beginning her career in 2017, that novel would meet a lot of resistance in the publishing community.

Two years ago, when I was seeking an editor for “Planet Song” I approached the same woman who had edited my previous novel “A Walk in the Thai Sun”.   She was resistant to editing science-fiction because modern science fiction did not interest her.   She expressed an admiration for the work of writers like Isaac Asimov and Arthur C. Clark because she could see literary value in what they were doing, but she did not have the same opinion of modern science fiction authors and had stopped reading them.

One needs to go no further than the work of Margaret Atwood to press home the point.  Ms Atwood is currently enjoying a resurgence of interest in “Handmaid’s Tale”, her 1985 dystopian novel.   (She can thank Donald Trump for that.)   I remember reading and enjoying that book when it first came out, but I remember little controversy about the book’s genre labelling.